How does the brain change through experience? Our lab attempts to understand visual neural plasticity with an eventual goal of "rewiring" adult visual cortex to aid therapy for visual disorders. We also study how the visual system resolves conflict that arises when scenes have multiple interpretations. This allows us to study how the "losing" interpretations are suppressed from awareness.

One dramatic example of visual neuroplasticity occurs when the visual environment suddenly changes, for example when we put on colored glasses. In such cases, visual neurons alter their firing properties in order to keep us seeing accurately. Critically, the longer vision experiences an environment, the stronger and longer lasting this adaptation becomes. This suggests that long-term exposure to altered visual input may produce long-lasting changes in cortex. But technical issues have prevented the study of long adapting durations under controlled conditions.

Research in our lab has overcome this roadblock. We use novel "altered reality" technology, in which images from a camera are processed in realtime and shown on a head-mounted display. This has allowed us to adapt for long duration. In one study, for example, subjects viewed a world missing vertical orientations for 4 days consecutively.

This work is testing just how strong and long-lasting the plasticity produced by adaptation can become. We are also uncovering factors that limit adaptation, and testing paradigms to make its effects larger and more permanent, in order to aid development of therapies for disease.

The neural bases of  long-lasting adaptation remains unknown. Current work in the lab is attempting to measure which parts of the brain are affected by long-term adaptation and more importantly, how the properties of neurons in those regions changed. We are using fMRI and EEG to record neural activity, including a wearable EEG system that can record all day while subjects are wearing the altered reality goggles.

We are also interested in how the brain learns to shift seamlessly between adaptive states with practice.For example, experience wearing colored glasses allows the brain to compensate more and more rapidly for the changes in overall color the glasses produce. 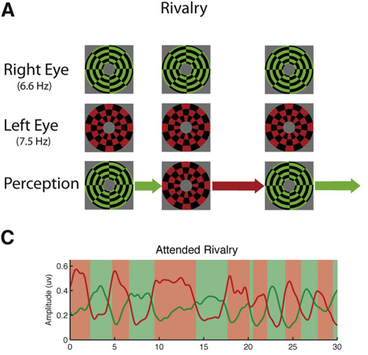 The images that reach our eyes are inherently ambiguous. In many cases, multiple interpretations are possible (for example the "face vase" image), and the visual system must suppress one of them. We are particularly interested understanding binocular rivalry: When two incompatible images are presented, one to each eye, perception alternates between them. This is a powerful model system for studying how information can be suppressed from awareness, and projects in the lab study when and how it arises, and its neural bases. One line of research investigates the role of attention in producing suppression, examining how potentially conflicting neural signals interact both when attention is present and when it is withdrawn. We use fMRI, EEG, and simultaneously acquired EEG and fMRI to measure cortical signals during binocular rivalry.

The research in the lab has implications for  disorders of the visual system. We are currently using VR technology to "remap" the visual field of patients with age-related macular degeneration, moving image content away from their blind spots. We are also examining the possibility of applying what we have learned about cortical plasticity to strabismus, when the two eyes misalign, as well as its consequence amblyopia, or "lazy eye".  Adaptation may play a role in how the visual system copes with these disorders, and our research seeks to understand this role. We also aim to use adaptation to produce novel therapies, for example helping strabismic subjects to bring their eyes into alignment, and helping amblyopic subjects to see better through their affected eye.